The announcement of a new contract celebrates the 20th anniversary of the partnership in style. Tissot and Dorna Sports are delighted to announce the renewal of their contract that sees the Swiss watchmaker remain Official Timekeeper of the FIM MotoGP™ World Championship for several years to come. This extends the longstanding partnership and also includes an expanded commercial presence within MotoGP™, taking the collaboration to new heights.

Founded in 1853, Tissot became the Official Timekeeper of MotoGP™ in 2001, with this season therefore marking the 20th anniversary of the collaboration. As the competition continues to gets closer and closer, with races and even Championships decided by such small margins, Tissot’s role has become ever more vital with each passing season.

Off-track, the partnership between Tissot and MotoGP™ also makes the headlines. The brand takes inspiration from the world of MotoGP™ to create stunning collections of timepieces and watches, reflecting a shared commitment to excellence, accuracy and precision. The rider on pole position in each class at each Grand Prix is also awarded an exclusive watch and Tissot pole position certificate, in addition to the Pole of Poles prize given at the end of the season to the rider in each class with most pole positions.

Tissot also enjoys an emblematic trackside presence at prime locations throughout the calendar and has recently added a new role as title sponsor for a number of Grands Prix in the last two seasons, further strengthening the collaboration between the watchmaker and the world’s fastest motorcycle racing Championship. This headline presence is now confirmed to continue as part of this new contract, with the Tissot name to take top billing at a Grand Prix each and every season.

Carmelo Ezpeleta, CEO at Dorna Sports: “We’re delighted to celebrate over two decades of collaboration with Tissot with another important announcement, extending our partnership once again. With Tissot as Official Timekeeper, it ensures our sport will continue in safe and capable hands, and we’re looking forward to seeing each new collection of timepieces inspired by MotoGP too. The Tissot name taking top billing at a Grand Prix each season is also fantastic news, ensuring the Tissot name retains its top line presence in the paddock into another new era of partnership.”

Sylvain Dolla, CEO of Tissot said: “The technological world of motorcycling reflects the nature of Tissot perfectly. It shares our passion for products, continuous development and a drive to keep pushing boundaries. It is also a source of inspiration to create unique watches with features that illustrate stunning details of the bike, which can be seen in the Tissot T-Race MotoGP Collection. We look forward to continuing to work with Dorna and to keep inspiring one another to deliver results both in Timekeeping and in our products, for athletes and fans alike.”

Introducing to New stream of watches Baby G-Shock, which is a very popular brand from CASIO. Since 1994, Baby G became buzz of the town with its pretty tough watches. Recently, they have evolved to be more practical also being prettier. It embraces all shapes, sizes and colours for every woman out there.

It offers range of watches for every season and weather with varieties of colours including the brilliant feminine light pink to overall range of colouring to match every lifestyle and way of fashion.

It is a highly recognized brand from Casio with history more than 25 years producing the extremely durable, functional and affordable watches which is prettier to look as well.

Wear a baby g watch and stand out from the crowd.

Birth of a digital watch that accentuates the lady’s fashion It does not only give the pricey looks but also gives key features and affordability to its users. Similar to G-Shock watches, Baby-G watches offers full shock resistance and many of them also has 200-meter water resistance, making it a popular choice for surfing and other intensive water sports.

Bay G aims to unite with the youth culture, fashion, music and sport through its design and technology.

It supports the reliable daily activities of life. Most of the series has robust shock resistant structure that helps to protect against any shocks or vibration. The original Casio structure can even withstand violent shocks from drops or strikes.

Every Baby G series is designed for at least 100m water resistant so that any customer can use it without things to worry about working on water or swimming.

Some of the series also shows the tide condition at the present condition or point for each hour and for specific date. This could be very useful feature for surfers.

So next time you go surfing, wear a baby G watch.

Find out more about Baby G series on Linda and Co website or in store.

A Short history on G-Shock:

The DW-6100 with a thermometer was the first sensor-equipped watch, released in 1992. The DW-520 is a smaller and  fashionable watch for women with the same level of shock resistance as a G-Shock, introduced the Baby-G line for ladies in 1994. GGB100-1A3.

GGB100-1A3 consists of Metal button pipes to  ensure a tighter seal against the external environment, while the case is built of high-rigidity carbon material to prevent damage and deformation due to impact and other rough treatment.

For the high level of dust and mud resistance required when working in harsh areas a filter is installed which further protects against the invasion of muck.

A stainless steel panel back and an outer cover made of shock-resistant fine resin embedded with glass fibres make up the dual back cover. 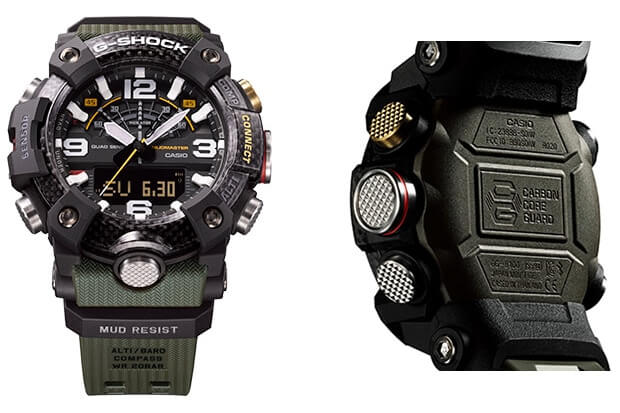 Over the last few years, Casio has focused more on purely analog or analog-digital watch dials for its higher-end watches. There are several reasons for this. we believe Casio is most interested in combining the practicality and durability of a G-Shock with the aesthetic appeal of a “genuine” analog dial when it comes down to it   (as opposed to an all digital watch face).

Hybrid dials, such as the one on the GGB100-1A3, which combines analog and digital features, have been a great compromise for Japanese watchmakers since the 1970s and truly took off in the 1980s. Casio is always striving to improve, but the 2019 G-Shock Mudmaster GG-B100 line appears to have found a sweet spot of design.

Similarly the pricing, and functionality that will provide them with years of steady sales across a variety of colour palettes. This is one of the few goods that looks nice both on and off the road. Linda & Co is a Premium Authorised dealer of Casio G-Shock.